Toronto, Ontario – TheNewswire - September 20, 2022 – CANSTAR RESOURCES INC. (TSXV:ROX ) & ( OTC:CSRNF) (“ Canstar” or the “Company ”) is pleased to announce that it has commenced drilling on its Golden Baie project. This is the third drill program by the Company on the Golden Baie project.

Planned drilling will test six target areas, including follow up on winter drilling at the Kendell prospect, (see news release dated July 5, 2022 ), which returned near-surface intercepts including 20.6 grams per tonne (“g/t”) gold over 3.5 metres (“m”). To date, gold mineralization at the Kendell prospect has been defined for approximately 180 m downdip from surface and mineralization remains open to the northwest.  Optical and/or Acoustic Televiewer (“ATV/OTV”) data from select 2021 and 2022 drill holes provides a better understanding of the vein orientations associated with the gold mineralized zones and will be used to orient the next drill holes at the Kendell prospect.

Drilling is also planned to test at least five additional targets in the central portion of the Golden Baie claims (Figure 1) that have been selected based on recent trenching, till sampling results, an IP survey completed this summer, and historical data.  Initial drill holes are expected to be shallow, averaging approximately 100 m each, as the geology in this area is typically shallow dipping to the northwest. Initial drilling is expected to total at least 5,000 m in 50-60 holes.

* Note that rock grab samples are selective by nature and values reported may not represent the true grade or style of mineralization across the property. 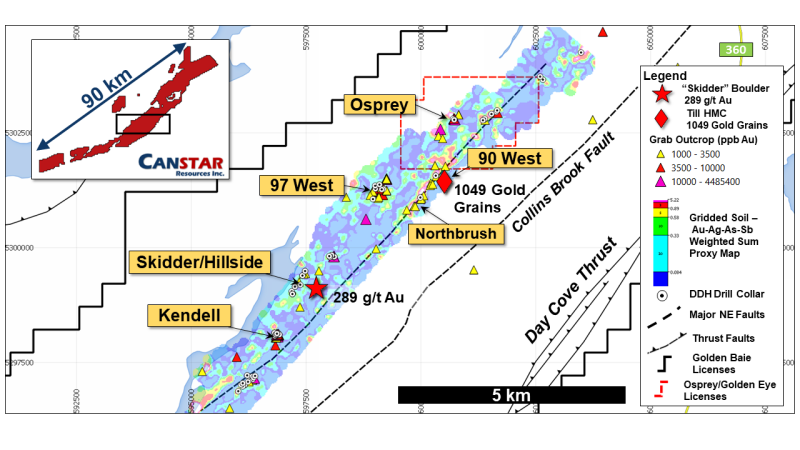 The Skidder target is located approximately 1.2 kilometres north-northeast of the Company’s Kendell prospect (Figure 2) and appears to be a similar style of orogenic gold mineralization. Rock sampling in the target area has defined a 500 m by 400 m gold anomaly with outcrop grab samples containing up to 30.3 g/t gold. Multiple anomalous float rock samples were also found in this area, generally assaying between 1 g/t and 10 g/t gold, and visible gold was noted in two float rocks which assayed 21.7 g/t gold and 289.4 g/t gold. The latter sample is referred to as the “Skidder boulder” and it is inferred to have a nearby bedrock source, based on till analysis and an understanding of regional glaciation.  The area is mostly covered by till, and systematic drilling is planned with the aim of locating the source of the Skidder boulder.

The 90 West and Northbrush targets are interpreted to be situated on the contact of the Isle Galet and Riches Island formations (Figure 3). The Isle Galet Formation is a volcano-sedimentary succession which is structurally overlain by the Riches Island Formation of predominantly marine clastic rocks. Coincident with the interpreted contact of these geological formations is a historic (1980s-era) soil anomaly with a strike length of 1.1 km and widths up to 75 m. Gold values in the soils are up to 248 parts per billion (“ppb”). Historically, only a single hole of 58 m in length tested the soil anomaly and returned 0.3 g/t gold over 6.8 m and recent trenching by Canstar was limited due to boggy ground conditions.

Till sampling in 2022 to the northeast of the 90 West soil anomaly yielded a trend of samples with previously-reported highly anomalous gold grain counts, with the best sample returning 1,049 gold grains. Trenching to potentially uncover the bedrock source of the gold grains is currently underway to the northeast in the projected ‘up ice’ direction. 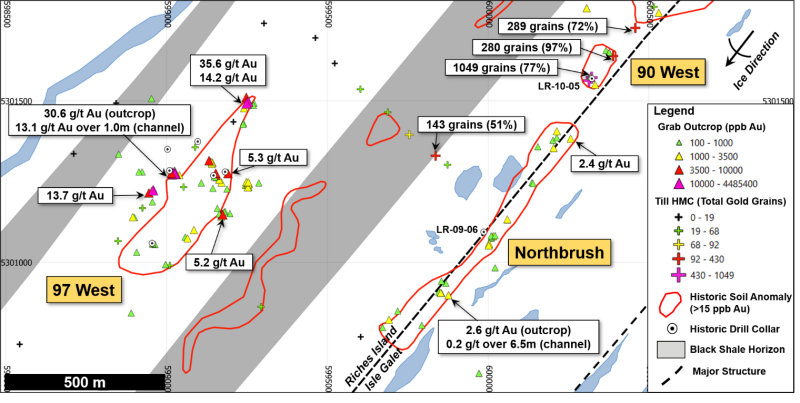 The 97 West target area (Figure 3) is underlain by fine-grained clastic sedimentary and tuffaceous volcanic rocks and is defined by a historic soil anomaly approximately 600 m by 200 m with values ranging from 30 to 482 ppb gold.

Results of trenching and prospecting in 2021 include a channel sample of 13.1 g/t gold over 1.0 m in trench 97W-21-TR01 and outcrop grab samples up to 35.6 g/t gold. Drilling will focus on documented gold mineralization in trenches and test the graphitic shale horizons that also host the high-grade gold mineralization at the Kendell prospect, located approximately 3.5 km to the southwest.

The Osprey target is hosted in the Riches Island Formation (Figure 3) with gold mineralization hosted in deformed, foliation-parallel quartz-sulphide veins. Historical work on the Osprey target includes three shallow drill holes drilled in 2009, two of which were drilled in the down-dip direction to the northwest. Rock grab samples included a boulder grading 142.1 g/t gold and outcrop samples grading up to 19.8 g/t gold.

The focus of 2022 drilling is to complete shallow holes to test the down-dip extension of the gold showings in outcrop grab samples.

Historic drilling at Wolf Pond in the 1980s delineated a mineralized zone (the “Wolf Pond Gold Zone”) averaging 2 to 3 m thick with grades of 3 to 5 g/t gold within a broader envelope 5 to 8 m thick averaging 1 to 2 g/t gold delineated over a strike length of 450 m and to a depth of 165 m (Figure 5). The zone is open both along strike and at depth. Mineralization is associated with sulphide-bearing quartz veins hosted in strongly deformed, sericite-altered felsic-intermediate tuffs intercalated with marine sediments. The best historic intersections include 3.0 g/t gold over 6.1 m and 2.4 g/t gold over 8.1 m.

Approximately 300 m southeast of the historic drilling area is a 750 m by 50 m gold-in-soil anomaly, with values ranging from 30 to 752 ppb gold, that has never been drill tested. The soil anomaly trends northeast-southwest and is coincident with the northeast-trending regional fabric. Grab samples in outcrop from the soil anomaly area range in grade up to 4.5 g/t gold. Drilling will focus on testing these soil and rock anomalies and the projected extension of the Wolf Pond Gold Zone to the northeast.

Canstar wishes to acknowledge the financial support of the 2022 exploration program through the Junior Exploration Assistance Program from the Department of Natural Resources, Government of Newfoundland and Labrador.

Canstar Resources has a very experienced technical team and board who are focused on new mineral discoveries in Newfoundland, Canada. Central Newfoundland has emerged as one of the most exciting gold exploration districts due to recent high-grade orogenic gold discoveries along crustal scale fault corridors. The Company is focused on gold exploration on 939 km 2 of mineral claim licenses in south-central Newfoundland (Figure 6), including the Golden Baie project which has multiple high-grade gold anomalies at surface along 40 km of strike and near-surface drilling confirming the presence of high-grade orogenic gold. The Company also holds the Buchans-Mary March project in central Newfoundland. 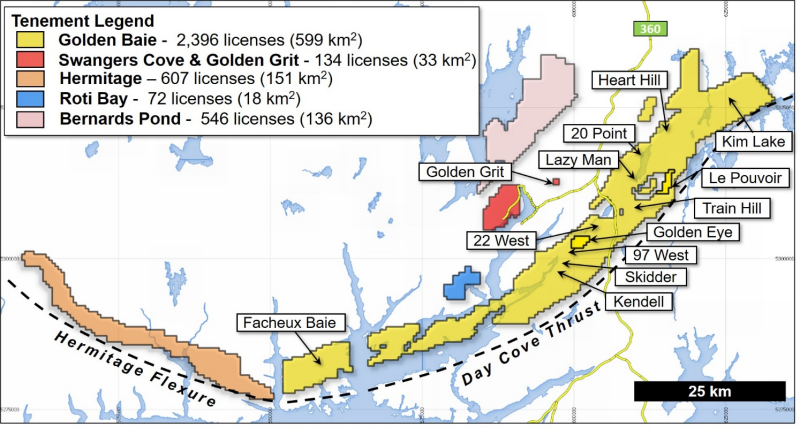