2022 Fully-funded Exploration Program is Largest Ever on Project

Toronto, Ontario – June 7, 2022 – CANSTAR RESOURCES INC. (TSXV: ROX & OTCPK: CSRNF) (“Canstar” or the “Company”) is pleased to announce final 2021 exploration results and the commencement of the 2022 field season on its Golden Baie and Hermitage properties in south-central Newfoundland.  Highlights of the 2021 field program on Golden Baie are provided below.

* Note that rock grab samples are selective by nature and values reported may not represent the true grade or style of mineralization across the property.

Canstar’s VP Exploration Matthieu Lapointe commented: “The Canstar exploration team is very excited to be back out in the field to find more gold at Golden Baie.  We have already drilled one significant gold prospect at Kendell, but we know from the preponderance of gold anomalies on the Golden Baie project that there are likely multiple sources of gold mineralization on our very large claim block.  Our goal is to make additional gold discoveries with the drill bit this year while continuing to build our inventory of future drill targets.” 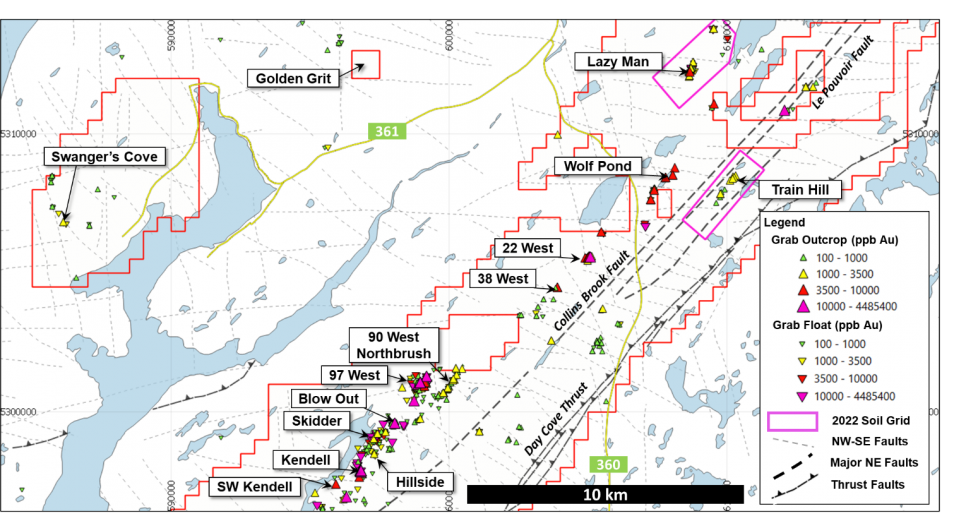 Prospecting work in 2021 focused on a combination of infilling this anomalous gold trend and extending it farther south.  As well, prospecting was conducted on the Swanger’s Cove claim block, which is located to the west of the main Golden Baie claims.  A total of 1,645 grab samples were collected and assayed in 2021, and all assays have now been received and analyzed.  Four new significant gold occurrences were identified by prospecting: 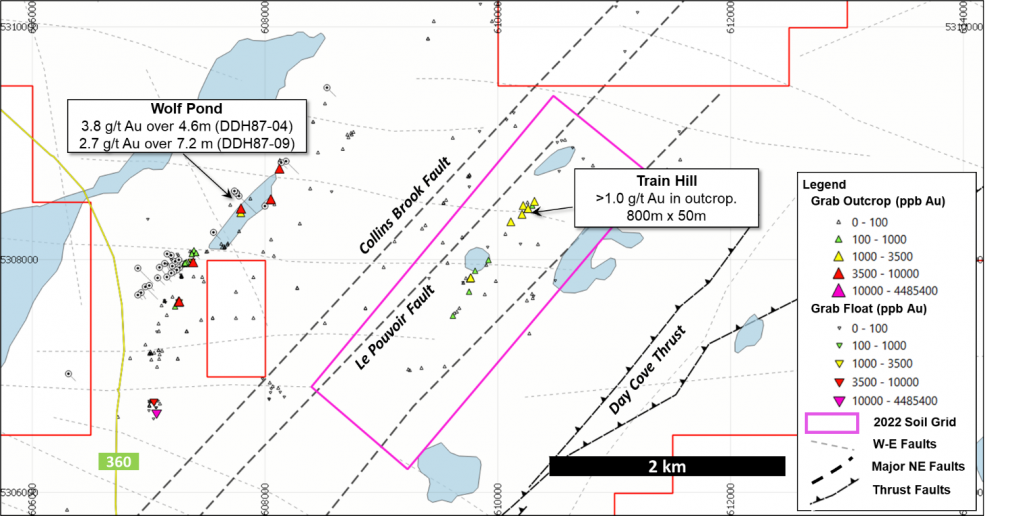 A total of 578 samples characterized as float or boulders were collected in 2021. The average grade of these samples was 1.3 g/t gold. The highest grade was 289.4 g/t from the visible-gold bearing Skidder boulder.  Twenty two samples assayed more than 5.0 g/t gold, 48 samples assayed more than 1.0 g/t Au, and 33 samples returned more than 0.5 g/t gold.  Table 1 provides highlights of the 2021 grab samples, with newly reported results shown in bold.

In 2021, the Company completed trenching on the 97 West, 90 West, Northbrush, Hillside and Blow Out targets (Figures 3 & 4). A total of 230 m of channel samples were collected from the trench exposures. Highlights from the channel results are reported in Table 2. 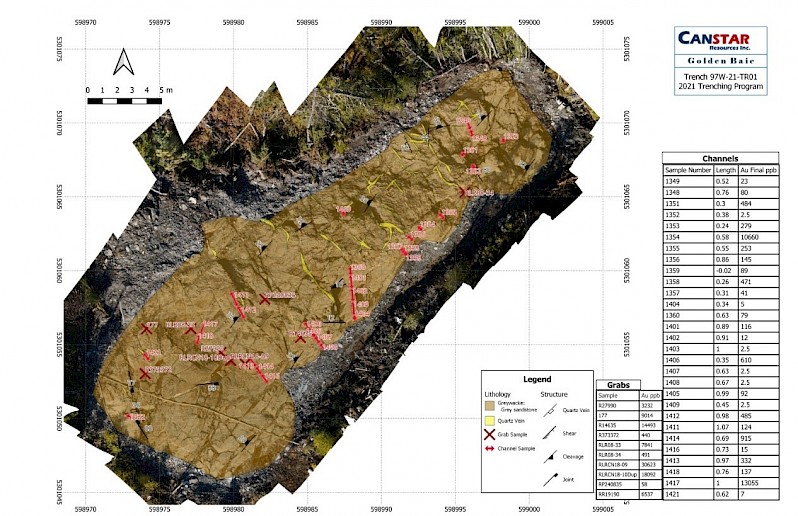 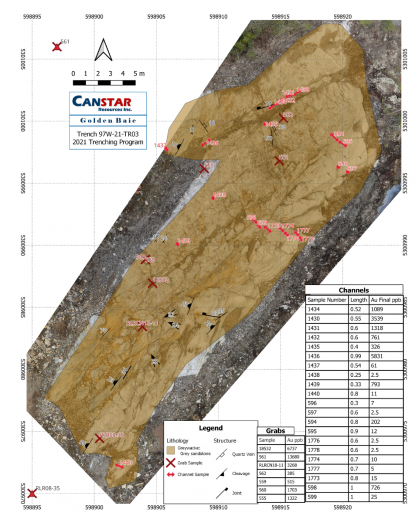 The best channel results were from the 97 West target area and, more specifically, from the 97W-21-TR01 trench. Gold mineralization grading in excess of 10.0 g/t was encountered in two channel samples from this trench and highlights the potential for the 97 West target to host high-grade mineralization. Like many of the occurrences at Golden Baie, gold mineralization at 97 West is associated with complex quartz vein arrays, silicification of wall rocks and disseminations of pyrite and arsenopyrite.

Canstar has budgeted approximately $6 million for the 2022 exploration program, which is more than double the exploration budget for 2021.  Work is already well underway, with a winter drill program successfully completed on the Kendell prospect in February-March and soil sampling programs completed on the Train Hill and Lazy Man targets in April.

In combination with the helicopter-based activities, the Company currently has field crews prospecting and till sampling on the Swanger’s Cove property and in the NE Golden Baie area. Both till sampling programs are reconnaissance in nature, with stations spaced at 500 m intervals along lines spaced 500 m or 1,000 m apart. All till samples will be processed for gold grain characterization by Overburden Drilling Management Limited of Nepean, Ontario. 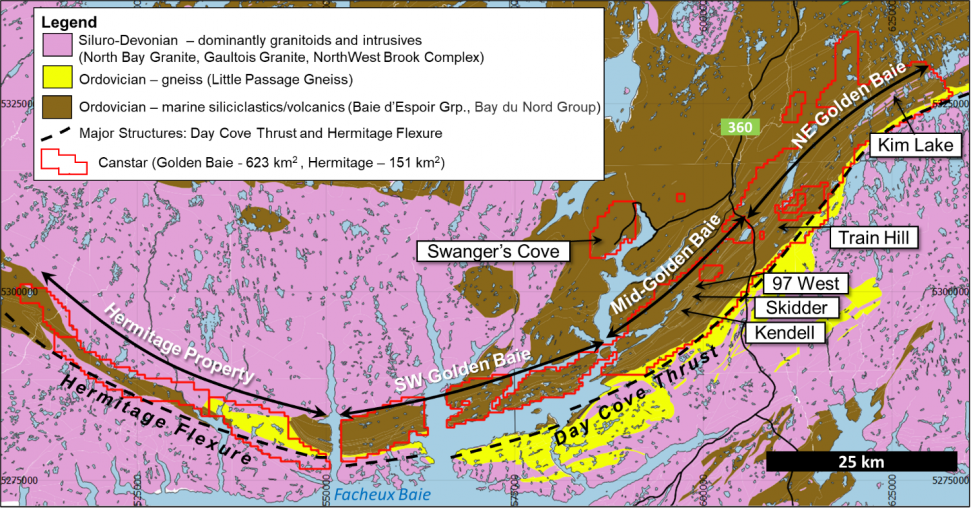 In early July, the company intends to focus its exploration efforts on the prospective central Golden Baie area (Figure 6), which has excellent access due to the nearby Baie d’Espoir highway. Planned work includes follow up prospecting and potentially scout drilling with a power auger and trenching on the newly discovered SW Kendell target as well as the Skidder area. To advance its drill targets, the Company is planning to acquire up to 10 line-kilometres of Induced Polarization (“IP”) on the Kendell, Skidder and 97 West targets. The IP/resistivity data are expected to aid in delineating zones of sulphide enrichment and silicification. The company also intends to acquire Optical and/or Acoustic Televiewer (ATV/OTV) data from select 2021 and 2022 drill holes to gain a better understanding of the veining orientations associated with the gold mineralized zones.

Reconnaissance Drilling in the Skidder Area

The Skidder target is located approximately 1.2 kilometres north-northeast of the Company’s Kendell prospect and appears to have a similar style of orogenic gold mineralization. Rock sampling in the target area has defined a 500 m by 400 m gold anomaly with outcrop samples containing up to 30.3 g/t gold. Multiple anomalous float rock samples were also found in this area, generally assaying between 1 g/t and 10 g/t gold, and visible gold was noted in two float rocks which assayed 21.7 g/t gold and 289.4 g/t gold. The latter sample is referred to as the “Skidder boulder” and it is likely to have a nearby bedrock source, based on till analysis and an understanding of regional glaciation.  The area is mostly covered by till, and systematic drilling is planned with the aim of locating the source of the Skidder boulder.  The exact area to be drilled will be defined once the results of the additional till sampling and aforementioned IP survey have been received and analyzed. 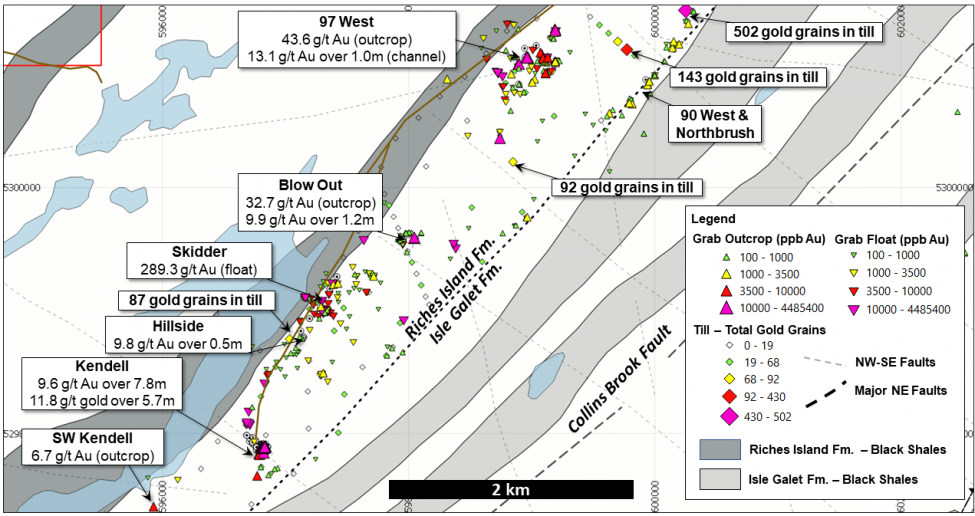 Winter drilling results from the Kendell prospect are pending.  High-grade gold mineralization was trenched and sampled in 2020 and 2021, with two subsequent rounds of diamond drilling completed to follow the orogenic style of gold mineralization identified in the trenches.  Gold mineralization typically occurs between two graphitic shale units that dip at a shallow angle to the northwest (down-dip).  To date, gold mineralization has been defined for 75 m along strike and approximately 200 m down-dip.  The Company believes that gold mineralization at Kendell is open in several directions and plans to conduct additional drilling this fall, with the potential to extend the gold mineralized zone.

All 2021 drilling was of NQ-sized drill core. Core samples were split with a diamond saw and half-core retained for further study after being detail logged and photographed. Samples are collected by company personnel and shipped to Eastern Analytical of 403 Little Bay Road, Springdale, NL. Samples are analyzed for gold using fire assay (30g) with AA finish and an ICP-34, four acid digestion followed by ICP-OES analysis for 34 additional elements. Metallic screening is being used for samples with visible gold and all samples with initial fire assays over 1 g/t Au.

Beginning in 2022, samples are sent to SGS Labs, Lakefield, ON for preparation of assay pulps. Gold analysis is completed in the SGS Labs, Burnaby, BC with a 30 g fire assay and AAS finish (code GE_FAA30V5). Samples returning >1 g/t Au are re-assayed with a gravimetric finish (code GO-FAG30V). Mineralized zones with visible gold are also analyzed by a 500 g screen fire assay with screening to 106 microns (code GO-FAS30M).

Soils are dried at a secure company facility and will be processed at SGS Labs using the GE_FAM50V5 assay method for gold (1-2,000 ppb Au detection) and the GE-IMS21B20 method, an ICP-MS analysis that captures 37 elements including trace level detection of pathfinders such as, Sb and W.

Canstar Resources has a very experienced technical team and board who are focused on new mineral discoveries in Newfoundland, Canada.  Central Newfoundland has emerged as one of the most exciting gold exploration districts due to recent high-grade orogenic gold discoveries along crustal scale fault corridors.  The Company’s flagship Golden Baie project, comprised of 774 km2 of claims in south-central Newfoundland, has multiple high-grade gold anomalies at surface along 40 km of strike. The Company also holds the Buchans-Mary March project and other mineral exploration properties in Newfoundland. Canstar Resources is based in Toronto, Canada, and is listed on the TSX Venture Exchange under the symbol ROX and trades on the OTCPK under the symbol CSRNF.

This News Release includes certain “forward-looking statements” which are not comprised of historical facts. Forward looking statements include estimates and statements that describe the Company’s future plans, objectives or goals, including words to the effect that the Company or management expects a stated condition or result to occur. Forward looking statements may be identified by such terms as “believes”, “anticipates”, “expects”, “estimates”, “may”, “could”, “would”, “will”, or “plan”. Since forward-looking statements are based on assumptions and address future events and conditions, by their very nature they involve inherent risks and uncertainties. Although these statements are based on information currently available to the Company, the Company provides no assurance that actual results will meet management’s expectations. Risks, uncertainties and other factors involved with forward-looking information could cause actual events, results, performance, prospects and opportunities to differ materially from those expressed or implied by such forward-looking information. Forward looking information in this news release includes, but is not limited to, the Company’s objectives, goals or future plans, statements, exploration results, potential mineralization, the estimation of mineral resources, exploration and mine development plans, timing of the commencement of operations and estimates of market conditions. Factors that could cause actual results to differ materially from such forward-looking information include, but are not limited to failure to identify mineral resources, failure to convert estimated mineral resources to reserves, the inability to complete a feasibility study which recommends a production decision, the preliminary nature of metallurgical test results, delays in obtaining or failures to obtain required governmental, environmental or other project approvals, political risks, inability to fulfill the duty to accommodate First Nations and other indigenous peoples, uncertainties relating to the availability and costs of financing needed in the future, changes in equity markets, inflation, changes in exchange rates, fluctuations in commodity prices, delays in the development of projects, capital and operating costs varying significantly from estimates and the other risks involved in the mineral exploration and development industry, an inability to predict and counteract the effects of COVID-19 on the business of the Company, including but not limited to the effects of COVID-19 on the price of commodities, capital market conditions, restriction on labour and international travel and supply chains, and those risks set out in the Company’s public documents filed on SEDAR. Although the Company believes that the assumptions and factors used in preparing the forward-looking information in this news release are reasonable, undue reliance should not be placed on such information, which only applies as of the date of this news release, and no assurance can be given that such events will occur in the disclosed time frames or at all. The Company disclaims any intention or obligation to update or revise any forward-looking information, whether as a result of new information, future events or otherwise, other than as required by law.