The Buchans-Mary March Project is located in central Newfoundland, 20 km northeast of, and within the same geological group that hosts the former producing Buchans Mine. The Buchans deposits rank as the world’s highest grade polymetallic (Zn-Pb-Cu-Au-Ag) VMS deposits with a Zn equivalent grade of 48%* (produced 16.2 Mt @ 14.51% Zn, 7.56% Pb, 1.33% Cu, 126 gpt Ag and 1.37 gpt Au between 1928 and 1984). Compared to other major VMS camps worldwide, it has seen only modest exploration and research, especially in the past 25 years, and most of the work preceded a new recognition of the geological model. 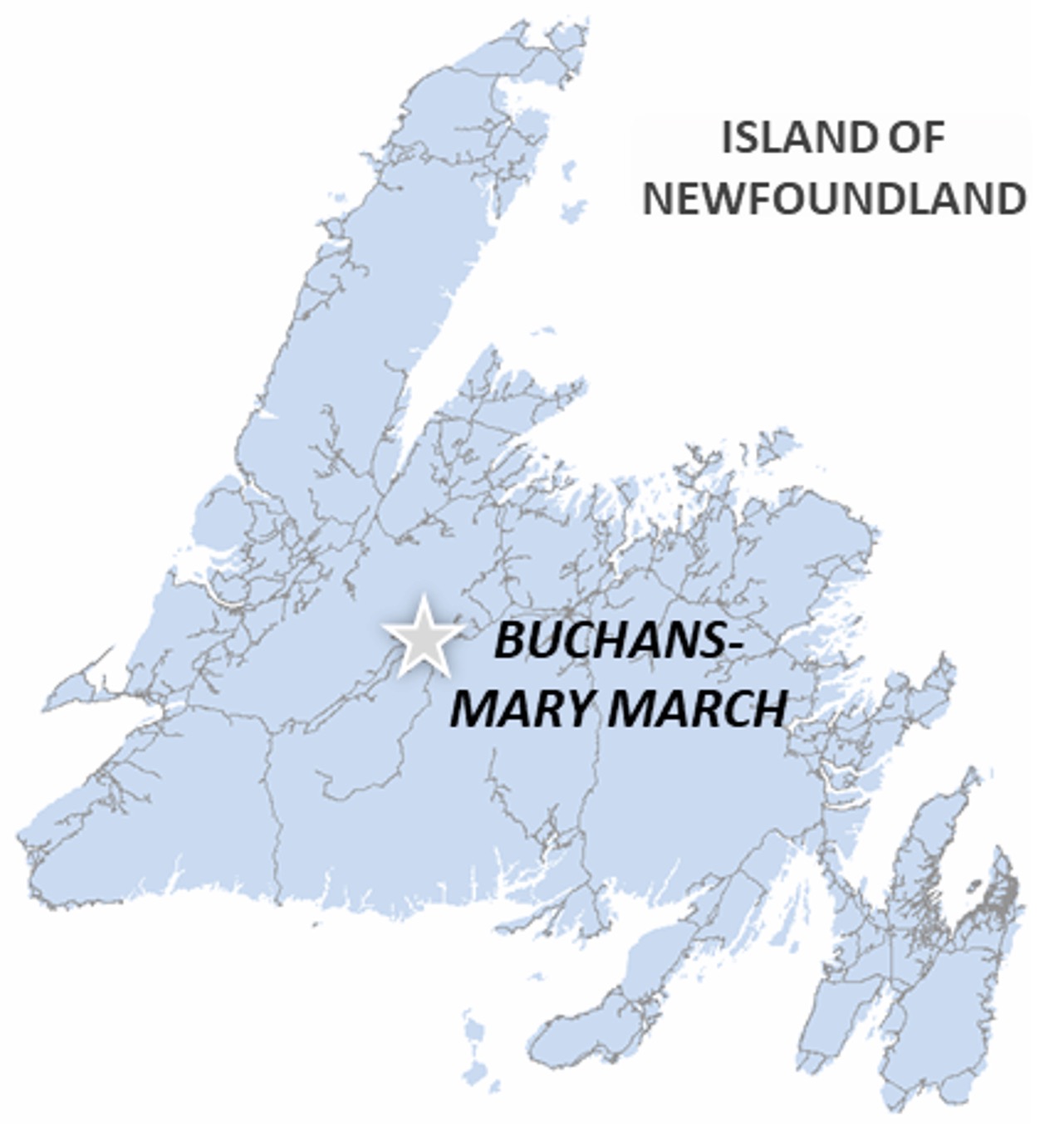 The Buchans Project comprises approximately 9,288 hectares of claims that surrounds the historic Buchans Mine.  In addition, the Mary March property covers approximately 6,512 hectares and is a JV property with Glencore. Canstar is the majority JV partner (56%/44%) and operator and has first right-of-refusal to acquire the remaining interest from Glencore.

Exploration drilling by Phelps-Dodge during 1999 to 2000 discovered the Mary March target, producing some of the highest-grade base and precious metal intersections ever achieved in the area outside the Buchans mine:

In 2017, a 3,867-line kilometre helicopter-borne magnetic and TDEM geophysical survey was completed over the Buchans-Mary March mineral concessions. The survey highlighted 35 notable targets, including several conductive targets that are coincident with known base metal occurrences and alteration zones in favourable host rocks. In 2019, a regional prospecting program included trenching that discovered a new high-grade copper-gold massive sulphide occurrence at surface, approximately 1.8 km along strike of the historic Mary March discovery hole. The bedrock occurrence consisted of a 4.5 m wide attenuated and strongly altered zone of felsic volcanics containing numerous clasts (10-20 cm in size) of base metal rich massive sulphides within a similar geological and structural setting to that which hosts the historic Mary March discovery hole (MM-294-7) drilled in 1999. Highlights from the massive sulphide grab samples include:

For additional details, please refer to the September 9, 2019 news release and Company filings.

The SE corner of the region also hosted Teck Resources Limited’s Duck Pond Mine, which operated between 2007 and 2015 with an initial reserve of 4.1 Mt averaging approximately 3.3% Cu, 5.7% Zn, 59 gpt Ag and 0.86 gpt Au. The Duck Pond 1,800 tpd flotation mill is currently on care/maintenance.