The Golden Baie project is the Company’s flagship precious metals exploration asset.  Canstar has the exclusive right and option to earn a 100% interest in the 622 km2 Golden Baie claims (August 26, 2020 news release link) and owns 100% of the 152 km2 Hermitage Project claims in south-central Newfoundland (January 24, 2022 news release link).  Additional claims covering 164 km2 in and around the Golden Baie property were acquired in August 2022 (August 15, 2022 news release link).  This large claim package covers favourable geology along a major gold-bearing structure at the eastern and southern edges of the Exploits Subzone, which hosts a large number of the gold deposits and recent new gold discoveries in Newfoundland. 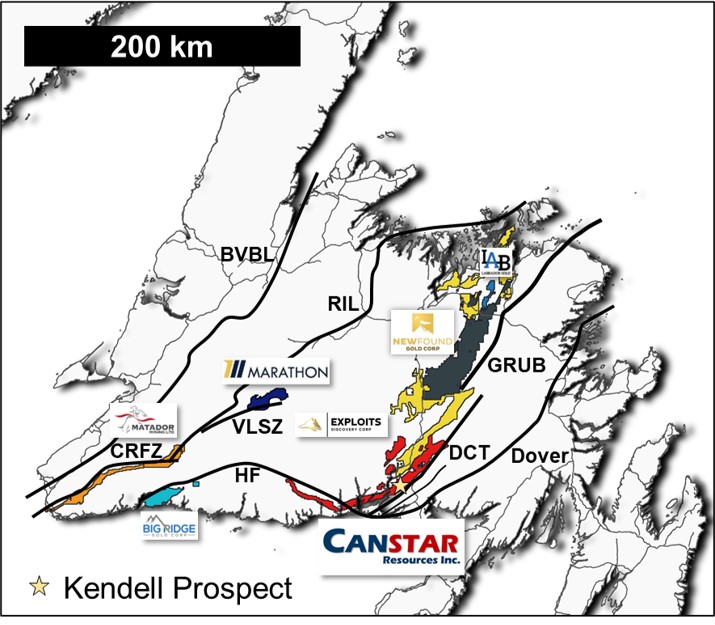 Golden Baie is typical of productive Paleozoic orogenic gold deposits worldwide. The project displays a strong association of free gold in quartz-carbonate veins or with disseminated sulphides in sheared wall rock argillite or volcanic rocks with an affiliation towards pyrite-arsenopyrite and antimony- (+/- lead, bismuth) sulphides.

Exploration has been both sporadic and limited on the Golden Baie project over the past 40 years, with the last program finishing up over 10 years ago. The project area had seen no modern geophysics and only piecemeal soil and silt geochemistry. Westfield Minerals Limited drilled approximately 60 shallow holes in the region in the 1980s and Mountain Lake Minerals Inc. drilled approximately 50 shallow holes from 2009 to 2011, of which 38 occur on the property. Some of the historic drill holes intersected gold mineralization, such as hole DDH LR-09-02 which intersected 4.8 g/t Au over 3.0 metres starting at 3.5 metres down hole. However, these exploration programs appear to have missed the multiple occurrences of visible gold in outcrops on the claims (Table 1).

Note: the reader is cautioned that rock grab samples are selective by nature and values reported may not represent the true grade or style of mineralization across the property.

The Golden Baie Project lies within the Coast of Bays region of south-central Newfoundland. Access is provided by Route 360, a paved highway which bisects the project area (Figure 3), and by recent power line and old forest resource roads. More remote areas can be accessed by helicopter while coastal sections can be accessed by boat from St. Albans or Conne River. 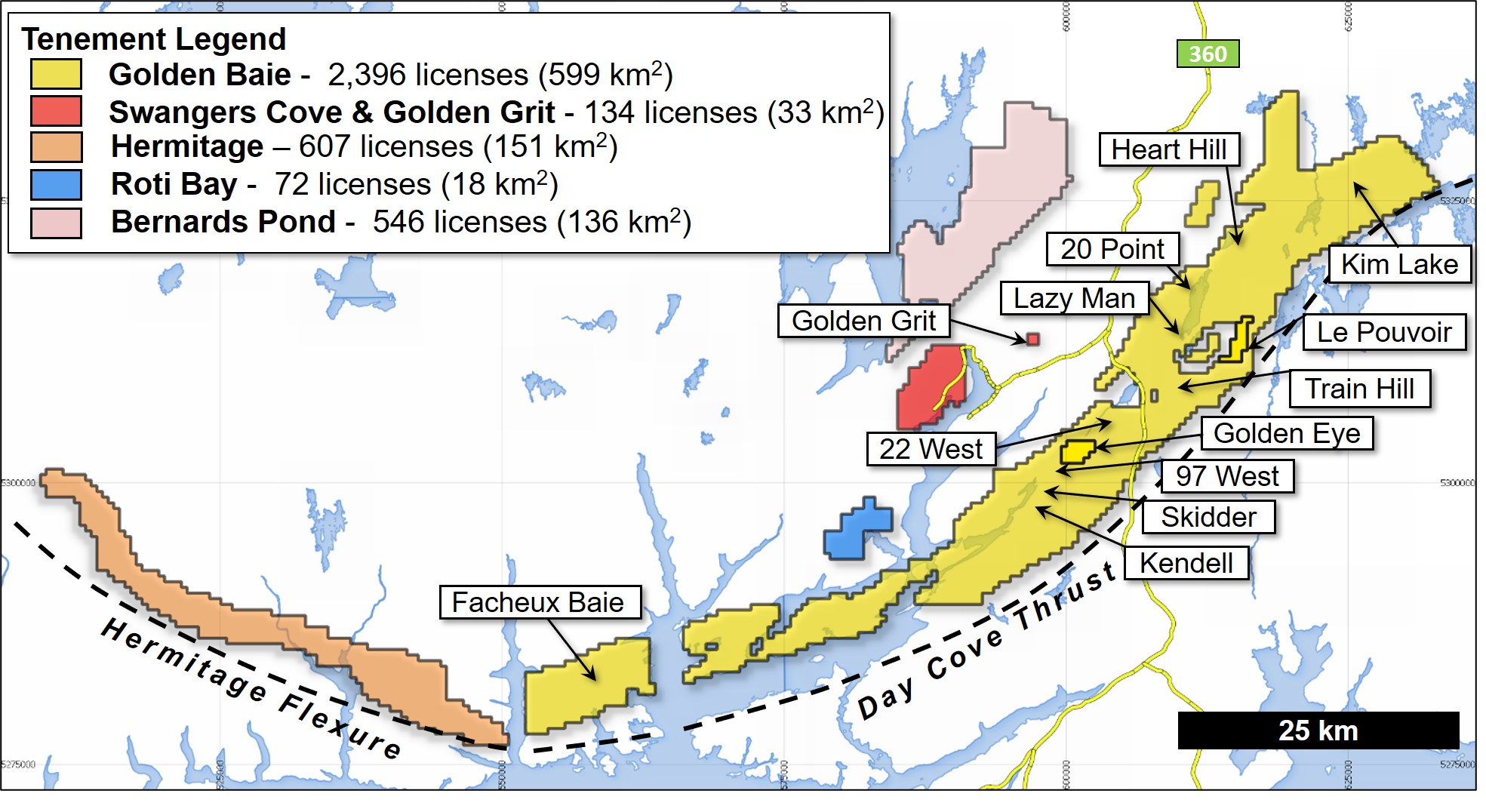 Figure 3 - Location of the Golden Baie Project and claim blocks

The Golden Baie Project is in the Exploits Subzone of the Dunnage Tectonostratigraphic Zone and is mainly underlain by Ordovician rocks of the Baie d’Espoir Group. The eastern margin of the project straddles the contact between the Dunnage and Gander tectonostratigraphic zones (Figure 4). The two zones are separated by the westward dipping Day Cove Thrust (Figure 5). 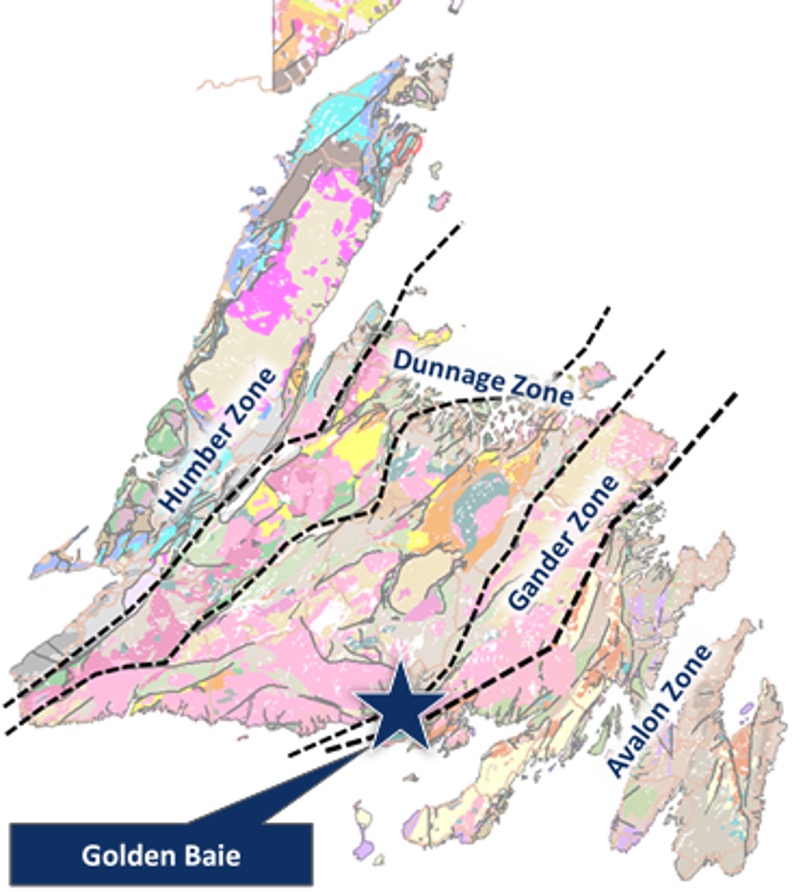 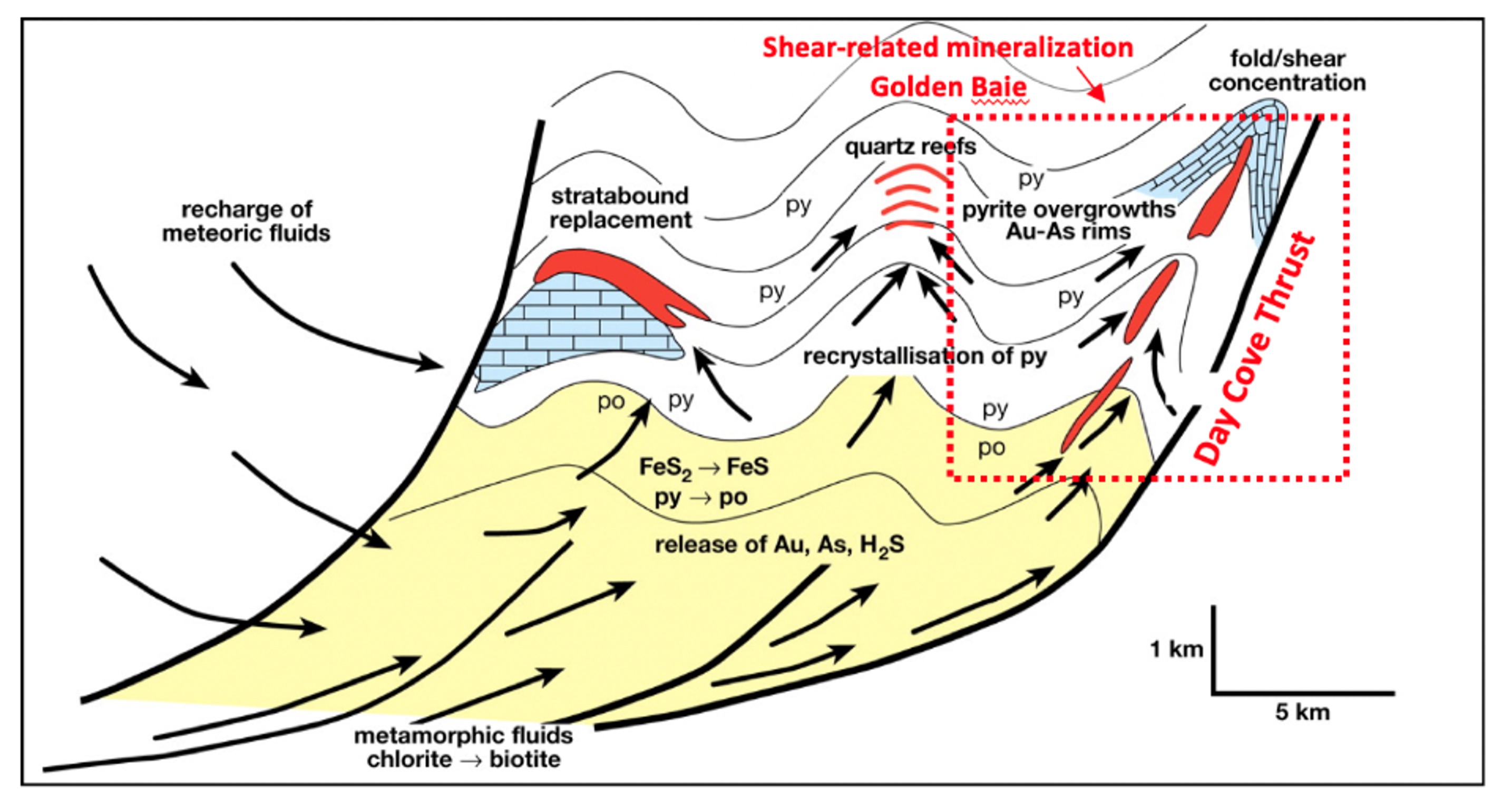 The Golden Baie Project covers both highly prospective rocks of the Baie d’Espoir Group which historic exploration and recent prospecting have shown to be a prolific host for gold mineralization, and the crustal-scale fault zone (the Day Cove Thrust) which juxtapose Neoproterozic Gander Zone rocks the with Cambro-Ordovician Dunnage Zone rocks (Figure 6). The tectonic setting, the late Silurian deformation and plutonism, the juxtaposition of Neoproterozoic-aged rocks with younger Dunnage Zone rocks, the presence of structurally-controlled gold mineralization and a pronounced linear-trending mineralized belt (Isle Galet Fm.) which sits in the hanging-wall to and largely parallels the trend of Day Cove Thrust, all indicate that the Golden Baie Project has significant potential to host economic gold deposits.

Primer on the Geological Subdivisions of Newfoundland (source: https://www.heritage.nf.ca/articles/environment/newfoundland-story.php) 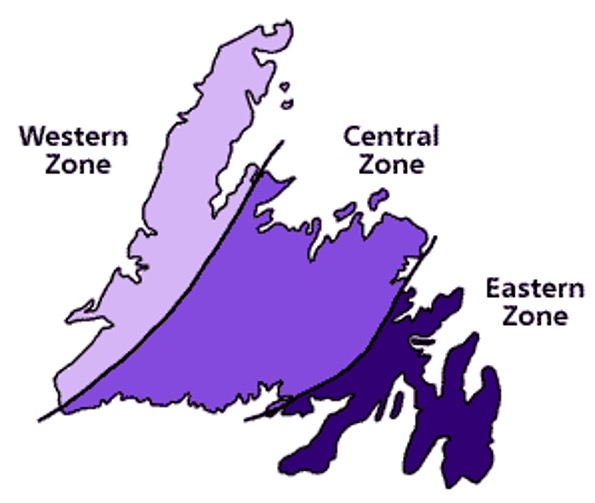 Figure 7 - Newfoundland in the Middle Cambrian (540 million years ago)

The bringing together of ancient oceans and continents has given Newfoundland three geological zones: the Western, Central and Eastern zones. Each of these zones has distinct rock types and geological histories.

In the Middle Cambrian two ancient continents, Laurentia and Gondwana, were separated by the Iapetus Ocean. The Western Zone of Newfoundland lay on the eastern edge of Laurentia while the Eastern Zone was part of Gondwana.

Then convection currents shifted and subduction began. By Early Ordovician time (about 490 million years ago), volcanic island arcs had grown above the subduction zones, as the floor of the Iapetus Ocean sank back into the mantle. Today, the remains of these island arcs are preserved in the volcanic and intrusive rocks of the Central Zone. 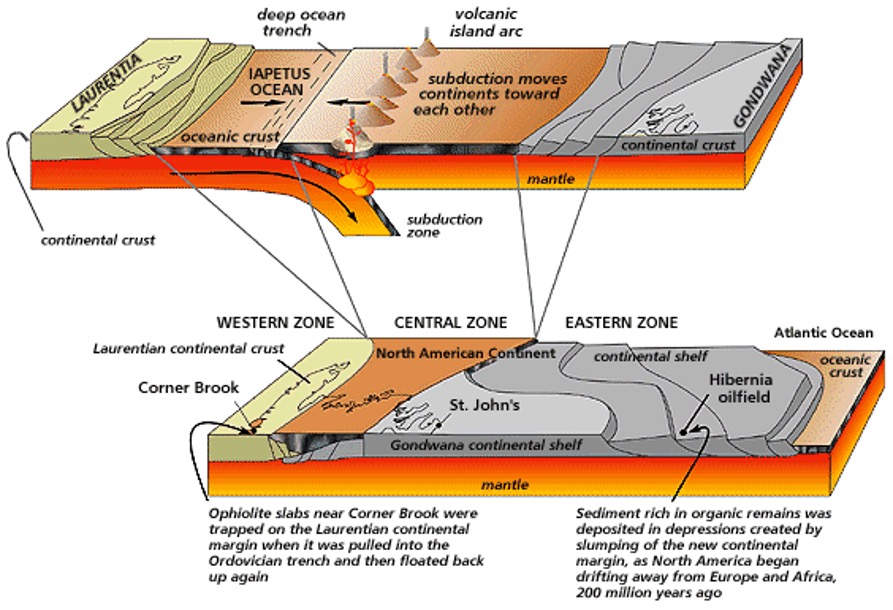 Subduction of the Iapetus Ocean caused the slow collision of Laurentia and Gondwana, forming a huge new continent. Across the middle of the continent, where the Iapetus Ocean had once been, there was a mountain range, and half way along this lay what is now Newfoundland. About 200 million years ago, this continent broke apart to form the present Atlantic Ocean; the fracture, however, occurred slightly to the east of the earlier collision line, leaving fragments of Gondwana still attached to Laurentia. The Eastern Zone of Newfoundland is one of these fragments.

Subduction of the Iapetus Ocean floor slowly pulled Laurentia toward another continent, Gondwana, which lay to the east. As the continents converged, pieces of ocean crust and the underlying mantle were pushed onto the continental margin of Laurentia about 470 million years ago.