Toronto, Ontario – TheNewswire - May 25, 2021 – CANSTAR RESOURCES INC. (TSXV:ROX ) & ( OTC:CSRNF) (“ Canstar” or the “Company ”) is pleased to announce details of its 2021 exploration program on the Golden Baie Project in southern Newfoundland.  The exploration program is budgeted for $1.5 million and will include at least 2,500 metres of diamond drilling, which will be the first drilling on the property in over a decade.  Subject to receipt of drill permits, drilling using a track-mounted drill rig is expected to commence by early June and continue into July.  This allows for a potential second phase of the 2021 field program, if warranted by drill results from the first phase of drill testing.

The 2021 exploration program was designed with two primary objectives:

Rob Bruggeman, CEO of Canstar, stated: “Our exploration team is excited to be back out in the field at Golden Baie after a short but productive field season in late 2020.  Our understanding of the Golden Baie property has advanced substantially since last fall due to compilation of considerable historical data, much dating from the 1980s, analysis of last year’s results, and detailed ground magnetic surveys that were recently completed at the Kendell and Blow Out prospects. A key focus of this year’s program will be to identify broader widths of gold mineralization and to vector in on potential high grade gold zones associated with orogenic style gold mineralization.” 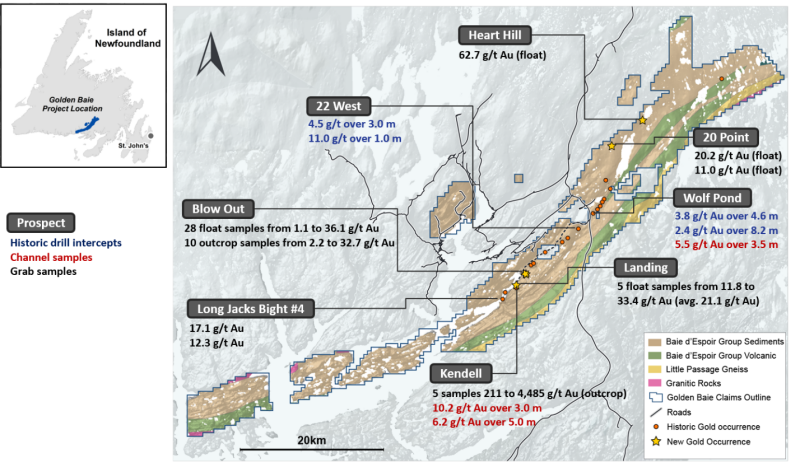 The Kendell Prospect is located in the central portion of the Golden Baie property.  It is a high priority target for drilling because grab samples from Kendell contain the highest grades of gold mineralization encountered on the property to date.  It was in the Kendell area in 2019 that the visible gold was first discovered on the Golden Baie property, with historical 1 grab samples assaying up to 4,485 g/t gold.  Canstar’s 2020 prospecting at Kendell identified multiple outcrop and float samples with visible gold in quartz stockwork and quartz breccia associated with intense silicification. ( Note: the reader is cautioned that rock grab samples are selective by nature and values reported may not represent the true grade or style of mineralization across the property.)

Two sequential trenches excavated in the Kendell area in 2020 uncovered quartz veins extending approximately 70 metres along strike (Figure 2).  Channel sampling of the trench included intercepts of 10.0 g/t gold over 3.0 metres (channel G) and 6.2 g/t gold over 5.0 metres (channel F) in trench TGB-20-01.  Channel cut C is also of significant interest, as it encountered multiple mineralized intervals in the vicinity of two quartz veins that appear to have undergone significant deformation and faulting. The vein structure encountered in trenches TGB-20-01 and TGB-20-02 may continue along strike based on rock and soil samples as well as ground magnetics, so these trenches are currently being extended.

At least six short drill holes are planned at Kendell to evaluate the dip and vertical continuity of the veins encountered in trenches TGB-20-01 and TGB-20-02.  Drill holes will test for the vertical continuation of mineralization identified at surface and advance the understanding of structural controls on gold mineralization. 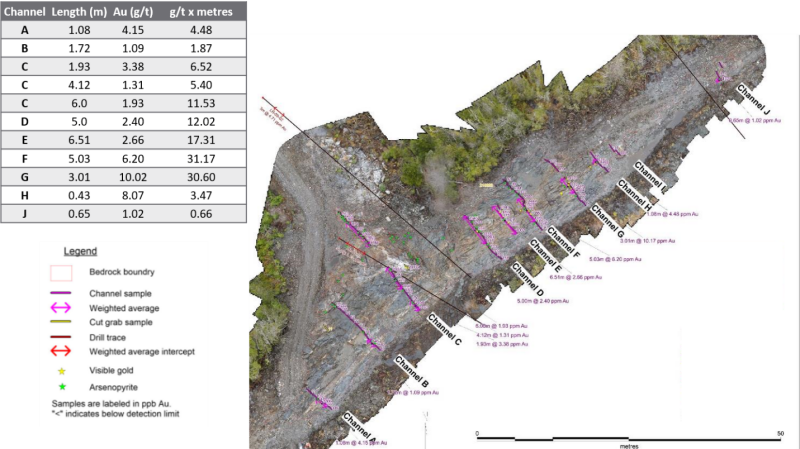 The Landing Target is located approximately 250 metres to the north northwest of the Kendell Prospect (Figure 3). Five out of fourteen historic float samples along an access trail in this location graded over 1 g/t gold, ranging from 11.8 to 33.4 g/t gold (averaging 21.1 g/t gold).  This area is wooded with little or no outcrop, so there has been minimal exploration.  Trenching is planned at the Landing Prospect to attempt to identify the source of the float samples (primarily angular boulders) along with additional prospecting work.  At least two drill holes are planned to test this area.

The Blow Out Prospect is located approximately 1.25 km NE of the Kendell Prospect.  A 1,450 x 400 metre soil sampling grid on 50 metres spacing completed in November 2020 indicated several anomalies with gold values up to 255 ppb gold along over 1 km along strike and up to 300 metres wide (Figure 4).  This soil grid is being expanded in the 2021 exploration program as two boulders grading 19.2 g/t gold and 36.1 g/t gold were discovered outside of the soil grid in late 2020.  The soil sampling will also be extended to the southwest, where additional gold mineralization has been identified along strike.  The size of the soil-in-gold anomalies and corresponding rock samples with gold mineralization grading up to 36 g/t gold make this area one of the priority targets for advanced exploration in 2021. 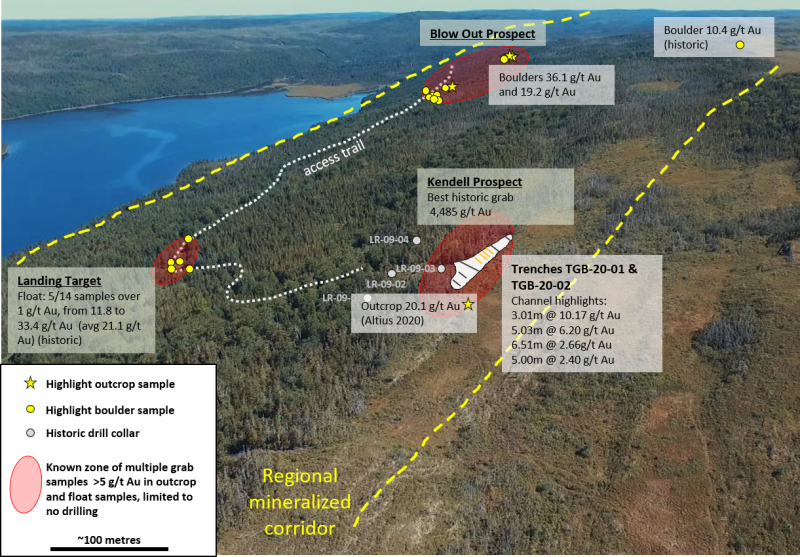 Figure 3 - Drone photo of the Golden Baie property near the Kendell and Blow Out Prospects, looking northeast

A ground magnetic survey recently completed by Canstar has aided the structural interpretation of the Blow Out Prospect.  There is ~500 metre wide magnetic high corridor that trends NE-SW, parallel to the Day Cove Thrust fault.  Interpreted east-west structures that are oblique to the main regional trend may help explain the clusters of grab samples with anomalous gold mineralization.  Trenching and drilling will evaluate the continuity and orientation of gold mineralization in this area with at least ten drill holes planned.  Initial drill holes will be short in order to confirm the vertical continuity of mineralization identified at surface.  If warranted by the initial drill holes, steeper and deeper holes will be drilled to test the continuity, thickness and grade of gold mineralization.

Canstar wishes to acknowledge its deep appreciation to the Government of Newfoundland and Labrador for the airborne geophysical surveys conducted across most of the Golden Baie property.  The surveys and maps provided are extremely beneficial to junior exploration companies like Canstar. We would also like to acknowledge the Government of Newfoundland and Labrador’s financial support of the 2021 exploration program through the Junior Exploration Assistance Program. 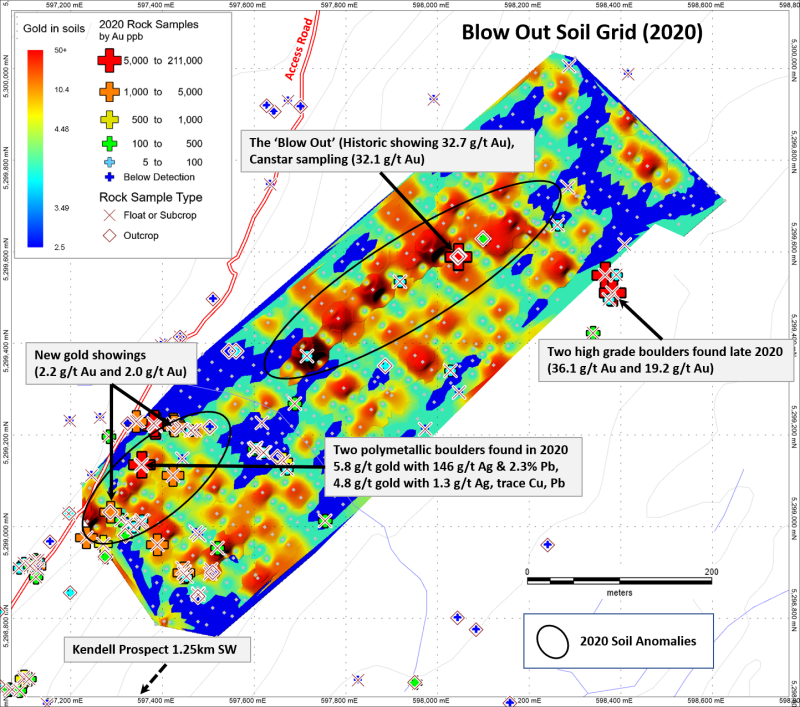 The Golden Baie Project has mineral occurrences at surface spanning 40 km along strike (Figure 1).  The mineralization generally occurs subparallel to a major regional thrust fault, the Day Cove Thrust, in rocks associated with metasedimentary and metavolcanic rocks of the Bay d’Espoir Group in the Dunnage Zone (Figure 5).  The Day Cove Thrust is believed to be the tectonic boundary between the Exploits Subzone of the Dunnage Zone and the Gander Zone in southern Newfoundland and it may be a continuation of the Gander River Ultramafic Belt (“GRUB line”) to the north.

The Golden Baie property has undergone major deformation as evidenced by mylonitization of the Baie d’Espoir Group extending several kilometres to the northwest from the Day Cove Thrust, across the Golden Baie property. Regional structures, such as the Collins Brook and Le Pouvoir faults, run subparallel to the Day Cove and there are defined and inferred secondary structures that are oblique to the regional faults.  Deep rooted mineralizing fluids are believed to have used these structures as conduits and are important for guiding exploration efforts to areas with potentially higher grades or larger volumes of gold mineralization.

Canstar is focused on the discovery and development of economic mineral deposits in Newfoundland and Labrador, Canada. Canstar has an option to acquire a 100% interest in the Golden Baie Project, a large claim package (62,175 hectares) with recently discovered, multiple outcropping gold occurrences on a major structural trend in south-central Newfoundland. The Company also holds the Buchans-Mary March project and other mineral exploration properties in Newfoundland. Canstar Resources is based in Toronto, Canada, and is listed on the TSX Venture Exchange under the symbol ROX and trades on the OTCPK under the symbol CSRNF.

1 Historic samples were not collected by the Company and have not or cannot be verified for accuracy.